I’ve always loved to read, and I’ve always said I love the feeling of an actual book in my hand. Then, I started to have stacks of books that I literally had no idea what to do with. So, I finally caved and bought a kindle. 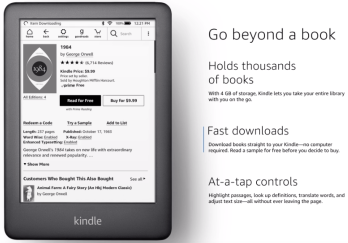 Best purchase – hands down! I purchased the regular Kindle on Amazon, it was only $89.99 and Amazon even gave me the option to make smaller monthly payments with no interest or penalty. There are other options, such as Kindle Paperwhite ($129.99) and Kindle Oasis ($249.99). The paperwhite and the original are fairly similar, there is an option for more storage but screen size, battery life, etc. are mostly the same. The Oasis is definitely an upgrade: larger screen, better screen resolution, and a more ergonomic design. I would say it’s definitely worth the money, but if you’re not extremely picky and just getting into the Kindle game, I think the OG works just fine! See a grid comparison of all three designs: here.

Where The Crawdads Sing

– Everyone and their mom has read this book, so you knew it was going to be on the list. A bit slow at the beginning – but well worth the hype. There is love, friendship, heartbreak, etc. Definitely a must read. Plus this is going to be made into a movie, which will probably butcher the whole thing (because that’s usually how it goes), so get to this first, so you can harshly compare the movie with the rest of us!

In Five Years – A love story, just not the one you think. After years of hard work and planning, Type A Dannie Cohan finally has it all: she’s aced a job interview at her dream law firm and her boyfriend just proposed to her. She goes to sleep that night and has an extremely vivid (wink, wink) dream set five years in the future involving a strange man she appears to be married to. When she wakes up, she can’t shake the dream, and is further disturbed when she meets her best friend’s new boyfriend, only to discover he’s the mystery man from the dream. This is a book you’ll want to read in one sitting. Then you will want to immediately share it with a friend. —Sarah Gelman, the Amazon Book Review

This isn’t a typical book I’d read, but I’m so glad I did. It’s a story of two French sisters during World War II and their struggle to survive and resist the German occupation of France. It’s a page turning drama that I would recommend to anyone.

Women In The Window (currently reading)
Anna Fox lives alone, a recluse in her New York City home, unable to venture outside. She spends her day drinking wine (maybe too much), watching old movies, recalling happier times . . . and spying on her neighbors. Then the Russells move into the house across the way: a father, a mother and their teenage son. The perfect family. But when Anna, gazing out her window one night, sees something she shouldn’t, her world begins to crumble and its shocking secrets are laid bare. What is real? What is imagined? Who is in danger? Who is in control? In this diabolically gripping thriller, no one—and nothing—is what it see

Before We Were Strangers – From the USA TODAY bestselling author of Sweet Thing and Nowhere But Here comes a love story about a Craigslist “missed connection” post that gives two people a second chance at love fifteen years after they were separated in New York City.
I have heard amazing things about this book, and I’m a sucker for a love story, so this one is in the running for up next!

The Last Mrs. Parrish – A REESE WITHERSPOON BOOK CLUB PICK! “Will keep you up. In a ‘can’t put it down’ way. It’s ‘The Talented Mr. Ripley’ with XX chromosomes.” —The Skimm

Breakfast blend is my favorite type of coffee, I’m a very punctual person, 98% of the time I’m wearing white nail polish, I think about alcohol during really inappropriate times and good company is very important to me.

My name is Byanca Ellul and this blog will be blend of advice, fashion/traveling/life and food, I think. Enjoy